How I Arrived At the Foot Zone Technique 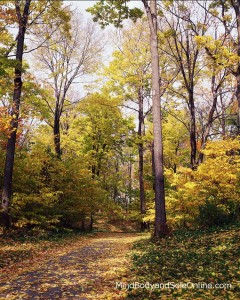 I believe that everyone is on a journey. And along that journey, Heavenly Father will draw our attention to something and say, “Look at this.” And we’ll go over and look at that and say, “Ok, I can do that.”

And then after a while He’ll draw our attention to something else and say, “Now, look at this.” And we’ll go over and look at that and say, “Ok, I can do that.” And eventually we realize that each of those things that Father had us look at were really just stops on the path of our journey.

Then, one day I went to a friend’s house after work and she commented that I sounded like I was coming down with a cold. I agreed and said something about going home and taking some Vitamin C. She told me that she had some and she offered them to me. As I looked at the bottle to see how many tablets I should take, she suggested, “Why don’t you muscle test?”

“Muscle test. Why don’t you muscle test to see how many Vitamin C tablets you need?”

She explained the process of muscle testing and I skeptically gave it a try. As my body swayed forward when I stated, “My body needs Vitamin C,” , I thought, “THIS is weird!” I knew that I wasn’t doing anything to make my body sway, but I wasn’t exactly sure what was happening.

Well, time went on after that and I really didn’t do a lot of muscle testing again until the same friend introduced me to essential oils. She was taking a class and in her training had learned about essential oils. Well, I thought the essential oils were pretty cool, especially since they were derived from plant material and so I ordered some oils and began to muscle test each morning to see which oil I needed that day (something she said that she did).

Well, after about a year of asking Heavenly Father to tell me if I was doing something wrong and getting no answer, I was pretty frustrated. So, one day, after muscle testing for my oils, I prayed, “Father, I just can’t do this anymore. I need to know what’s happening. I don’t want to do anything wrong, so unless I know what’s going on, I just can’t muscle test anymore.” Then I waited, and the Spirit said to me, “It’s your spirit telling you what your body needs.” And I went, “Ohhhh, ok. I can do that.”

Then the Spirit said, “And you need to take foot zoning classes.”

However, I knew the Lord would direct me.  Heavenly Father doesn’t tell you to do something and then sit back and watch you fail.  And because of my experience, there was one other thing that I knew – energy work is Spirit work and it’s spiritual work, and I knew that whoever I took my training from needed to understand that as well.

So, I began researching the different schools.

Do They Get It?

The school I felt most drawn to was We Do Feet. But the training wasn’t inexpensive and there was no way I was going to spend $3600 for training unless I knew that they “got it” – that they realized that energy work was Spirit work.

As luck would have it, We Do Feet was offering an Energy Class in a couple of weeks and it was only $250 for the week-end, so I decided to sign up for the class. I surmised that by attending an energy class, I would be able to determine if they “got it.”

I went to the class that following week-end and loved it! They “got it!”

So I went home and prayed to Heavenly Father, “Father, I think this is the training I’m supposed to take. I’ve gone to their energy class, and could feel the Spirit while I was there. I talked with them and they understand that energy work is Spirit work. So, if I’m supposed to take this class and this is the path that Thou would have me on, then on (I gave a date that was the Monday before classes started) I’ll have enough money in my checking account to pay for Class 1. And if I don’t, then I’ll know that either I’m not supposed to take this class or this isn’t the right time for me to take it.”

I finished my prayer and went about my business.

Well, the day approached and it was the Monday before class started. That afternoon as I sat at the computer to check my account, the phone rang and it was the owner of the school. He said, “Kathy, I’ve had this feeling all day that I needed to call you. Have you been thinking about taking the foot zoning classes?” Well, I began to cry as I explained to him what had happened and what I had prayed for. His response to me was, “Kathy, I don’t care what you have in your account. You’re supposed to be in this class, so you come on Thursday and we’ll take it from there.”

I knelt down and thanked Heavenly Father and on Thursday, I was in my first foot zoning class – WITHOUT ever having had a foot zone!

I Believe in Miracles 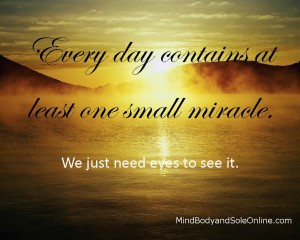 If you’ve been thinking about taking the Foot Zone Certification classes, please give me a call, 801-292-7574. This might just be the next stop on your path, and I would love to help you on your journey.

“Every day contains at least one small miracle.” We just need eyes to see it. 🙂