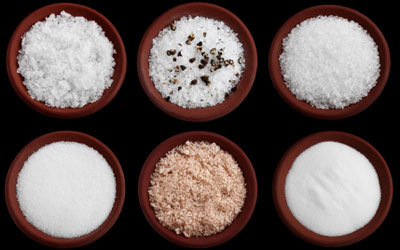 Long ago in what is now Central Utah, Native Americans found a mineral-rich salt deposit from an ancient sea when they saw deer eating the soil.  in 1959, Milo and Lamar Bosshardt were struggling to keep their family farm afloat when they discovered that this salt deposit extended beneath their land.  They began selling the salt to local farmers for their animals and heard reports the farmers were using the salt to season their own food.  People insisted this “real” salt be made available for everyday use, and the Real Salt brand was born.

Today, Real Salt is brought to you in its natural state – without additives, chemicals, or heat processing of any kind.  Real Salt’s unique pinkish appearance and flecks of color come from more than 60 naturally occurring trace minerals.  The result is a delicate “sweet salt” flavor that you many not have experienced before.

“I wanted to tell you of the great success I have found in using Redmond’s Salt. I attended a class on the natural salt in March of 2011 and just knew that it was the answer I had been looking for. I had been diagnosed with primary hypertension in December of 2008 and the Doctor’s could not tell me why. I was immediately placed on BP medication which managed my BP well. I knew that medication was not the answer though after I lost a pregnancy in my second trimester. Some BP meds have this side affect. I did not want to continue taking medication and was looking for a natural cure. When I heard about the sea salt I knew as a nurse that it had the ability to create homeostasis within my body because of the multiple amounts of trace minerals contained in it thus lowering my blood pressure. I know that my body is missing some of these key trace minerals and that the salt is filling in those holes. I began taking 1 tsp. in water every day in conjunction with my BP meds and monitored my BP morning and night. I was amazed that after only 2 days my pressures were dropping to 110’s/70’s so I cut my BP meds in half. Within a week my BP’s were starting to get near borderline lows of 90’s/60’s. I couldn’t believe it so I got off my BP meds all together. I now take about 1 tsp a day of the salt unless my pressures start to go low and then I cut that in half but honestly my BP has achieved the homeostasis that I wanted using real salt. Imagine that my blood pressure issues were solved with SALT! It is unbelievable but true. I am grateful I was led to this product and it will forever be a part of my daily health ritual as well as the only salt I use to cook with. I have also continued to exercise and watch what I eat as I know this is a big cause of hypertension. Thank you Real Salt!” Janell Perez; Centerville, Utah

Is Salt Worth It’s Salt?

Have you ever heard the phrase, “They’re worth their salt?” It means that a person is worth their pay. You see, there was a time that salt was so valued that people were paid with it. The word salt itself actually comes from the Latin word salarium meaning salary. Salt bars were even used as a form of currency for more than 1,000 years in Ethiopia, and in Greece, salt was exchanged for slaves.

Salt mines were part of the expansion west after the Civil War as well. Detroit and Cincinatti are actually built on top of salt mines.

Well that began about 150 years ago when salt began to be “refined”. The refining process strips salt of minerals (they’re referred to as “impurities”) using sulfuric acid. The salt is then heated to 1200* F. What’s left is 100% sodium chloride. To enhance the flavor and prevent caking, aluminum, anticaking agents, and dextrose are added, which stains the salt purple. To get the “pretty” white color, the salt is then bleached.

Refined salt upsets fluid balance in the body, dehydrates the cells, hampers the immune system, initiates and accelerates chronic illness, and promotes acidity in the body. Unrefined salt is easily used by the body. The minerals are essential for a healthy immune system.

David Brownstein, MD, in his book “Salt Your Way to Health

So in answer to the question, “Is salt worth it’s salt?” I guess that depends on the salt that you use.

“Salt Your Way to Health

” by David Brownstein, M.D., provides the following uses for salt:

Exercise: At the start of exercise, take one large pinch of salt with a glass of water. If the exercise results in a large amount of sweating, repeat at the end of the exercise session. Salt will prevent muscle cramps and aid in muscle recovery after exercise.