If you’ve read my post on How I Arrived at the Foot Zone Technique, you know that I recognize that each of us is on a journey of self-discovery.  Part of becoming who I am meant to be means focusing on my path rather than getting distracted by things, even good things, along the way.  Something that I tell my students is, “Everyone can’t collect firewood.”  What I mean by this is that everyone can’t be a Foot Zone Practitioner.  Not because they don’t have the ability, but if everyone were a Foot Zone Practitioner then we wouldn’t have massage therapists, and we wouldn’t have chiropractors, and we wouldn’t have practitioners of all the other wonderful holistic modalities that are available.  Each of us has our own gifts and talents that we’re supposed to develop and share.  (D&C 46:11-12)

So rather than being distracted by every single modality available to mankind, if I pay attention I’ll be directed to the things that are part of my path and my journey.

Sometimes, discovering the next step of your journey comes in very unexpected ways.  That was how I discovered Jin Shin Jyutsu.

Step One – Get Started

There are many different Foot Zone Certification programs, but I felt directed to take classes from We Do Feet Seminars.  Part of the training involves learning how to recognize and release energetic and emotional blockages that we encounter during the foot zone session.  Toward the end of my training and following certification, there were certain energy signals that I felt directed to.  They weren’t taught in the class, but when I incorporated these signals into my session, I could feel them balance.  As time passed, and I gained experience, I would also gain an understanding of what was happening during those balancing moments and understand where, or what, those signals on the foot corresponded to in the body as well as what was accomplished through the process of balancing.

For about 4-6 months before hearing about JSJ, I had several sessions a week in which the client tested for additional energy work before their foot zone, but as I went through my tool box, the answer was “no” to each of those modalities.  Eventually, when that happened I would say a silent prayer asking to be directed to what this client needed.  What I found is that I felt impressed to place my left hand on a point of the clients body and my right hand on a different point, I would wait for those two points to balance, then I would feel impressed to move one hand to a different point on the client’s body.  After those points balanced, I would feel impressed to move my hand to a different point.  Eventually, I would know that the balance was complete and I could begin the Foot Zone Session.

Then one day a friend asked me for a Foot Zone.  She had been certified in the Foot Zone Technique through a different training program that didn’t teach about energy work or balancing and she wanted me to show her the different energy holds that I used during a session.

During our session I explained the energy work that I did, some that I’d been taught during my training and some that I’d added myself.  While demonstrating one particular hold, I explained that the points I held with my right hand corresponded to the root chakra and assisted in “connecting with earth.”  At the same time I held these points, I held another point on the foot with my left hand and although I hadn’t yet gained a knowledge of what that point corresponded to, what I did know was that the purpose was to “connect with heaven,” and that after those points balanced, they then helped “bond body and spirit,” so they were working together in harmony rather than in opposition.

That’s when my friend commented, “I know what that point is, it’s a Jin Shin Jyutsu® point, and it does connect with heaven.”

I’d never heard of Jin Shin Jyutsu®, so I asked her to explain.  She shared what she could, but as a new student of this modality there wasn’t a lot of information she could provide.

After she left, I did some research and found a Jin Shin Jyutsu® Practitioner in Salt Lake City who also taught self-help classes.  I called the Practitioner to ask some questions.  She explained that she wasn’t teaching classes at the moment because she was caring for a sick friend, but she agreed to have a private session with me and explain some basics about JSJ if I wanted.  During our session, she shared the history of Jin Shin Jyutsu and some basic information about Organ Flows and Depths. 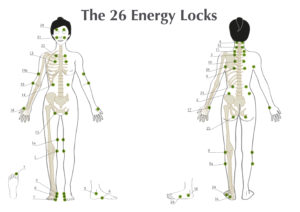 But what I remember most from our time together was when she showed me the map of Safety Energy Locks and explained that during a session, the Practitioner would place the left hand on one of the SELs and place the right hand on another SEL and hold them there until they balanced.  Then the Practitioner would move one of the hands to another SEL and hold those two SELs until they balanced and that would continue until the sequence was complete.

As I looked at the map of Safety Energy Locks I recognized them as the places on the body that I had felt impressed to hold on my clients during the previous months’ sessions when the client tested for an energy modality but not for any that I’d been trained in.  I decided at that time that if the Spirit was teaching me JSJ before I even knew what JSJ was, then I should probably learn more about this modality.

It took a year before I found a class that I could take.  Although classes are taught in Salt Lake City, the schedule offered at that time wasn’t one that would work for me.  Eventually I found a class in Reno, NV that did fit my schedule so I drove to Reno for a 5-day class in JSJ.

For a number of reasons I was very nervous about attending this class.  Because I understand that energy work is spirit work, I’ve always been very particular about who I take classes from and I didn’t know this instructor.  Yet, as the instructor began the class, he started by teaching The Order of Creation which explains the process by which energy “denses down” to become matter.  As he explained this process, I recognized it from the Book of Abraham in the Pearl of Great Price.  I immediately felt a feeling of peace and calm wash over me.

What should be understood is that JSJ is a Japanese energy modality that was used anciently before the birth of Mohamed, before the birth of Moses, and before the Kojiki.  The Book of Abraham is ancient scripture that is considered sacred by the Church of Jesus Christ of Latter-Day Saints.  The instructor was Jewish.  There was no connection between the three except that truth is truth and will make itself manifest throughout the world to those who seek it.

That was 2013 and I love the knowledge that I’ve gained in my Jin Shin Jyutsu® classes.  I love sharing this gift with my clients.  But the greatest blessing is knowing that I’m following the path that was meant for me and I get to help and serve along the way.